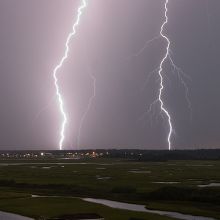 It is tempting to take the film of your great experiment, pop it on the scanner and use densitometry to quantitiate your Western results. But what you calculate could be mis-leading and even down-right wrong. Here’s why:

X-ray film is coated with an emulsion that contains light-sensitive silver halide crystals or grains. Light activates the silver crystals which converts some of the silver crystals to atoms. But you can’t see this because the change is so small. When you develop the film, the silver atoms catalyze the reduction of the entire crystal to black metallic silver that is visible on the film. The rest of the silver grains are washed away during the developing process.

How film responds to light

Film response to light is governed by the law that states that the response is detemined by signal intensity and exposure time:

In theory, bright light delivered for a short time should produce the same result as dim light delivered for a longer time. Here’s the problem though – the theory only holds over a limited range of values and is inaccurate outside of the range. When signals are very bright or very dim, the film response is no longer proportional to the exposure. This occurs for a couple of reasons.

Film is less sensitive to dim light and therefore low signals are underrepresented. This is due to how silver crystals are activated. Silver crystals require a minimum threshhold of light to remain stably active. When a crystal is only activated by a few photons of light, the activation is not stable and the crystals revert back to their inactive state. They will only remain active when a minimum threshhold is reached, even if longer exposure times are used.

Dimmer signals can be captured by “pre-flashing” the film to an instantaneous flash of light. This bypasses the requirement for a minimum threshhold of light by pre-activating the crystals. However, it is difficult to pre-flash film reliably.

If you have ever performed a Western blot, you have probably seen film become saturated by strong signals. Although it is impressive to see huge dark bands on your blot, these are no longer in a linear range of detection and there is no way you can judge how much protein you have on the blot.

As signals increase, film has a non-linear response to light. This is due to the fact that as more and more crystals become activated, there are less chances that a photon can strike and activate a crystal. It is kind of like that childhood dodgeball game: as more and more people are struck out, it becomes harder and harder to get the remaining people out. Strong signals eventually plateau and saturate.

How should you quantitate your Western?

Unless you have the perfect exposure time with signals that are neither too dim nor too bright, film can only be considered semi-quantitative. Digital imaging should be used for true quantitative results.

To learn more about film and digital imaging, check out our WiKi article.