Chemiluminescent Western blotting (also called enhanced chemiluminescence; ECL) is one of the most popular methods for detecting protein expression. Since the late 1970’s, ECL has replaced radioactive probes and less-sensitive colorimetric assays. ECL relies on the production of light through an enzyme–substrate interaction. Traditionally, the light was captured and documented on x-rays films. However, digital imaging has given researchers new methods for documenting and analyzing Western blots.

This Advansta WiKi Guide will discuss the advantages and disadvantages of film and digital imaging.

X-ray film is composed of a flexible, transparent base coated with a gelatin emulsion containing radiation-sensitive halide crystals (usually silver bromide or silver chloride). When x-rays or light hit the crystals, some of the Br- or Cl- ions are freed and captured by the Ag+ ions. Normally this change is so small it remains undetected. However, when exposed to a chemical developing solution during the developing process, the reaction forms black, metallic silver that is suspended in the gelatin emulsion and creates the image.

When used with ECL, the x-ray film is placed directly against the plastic-wrapped blot. The close apposition of the blot to the film allows for sensitive detection of the signal. The exposure time can be adjusted easily to allow for short exposures and capture of high intensity signals or long exposures for low intensity signals. The film can then be developed within minutes using a commercial developer.

Film is ideal for documenting relative amounts of proteins, such as assessing whether a protein is expressed by a particular tissue or cell line, or when comparing large signal differences. However, a major drawback to film is that it is only semi-quantitative. Film has a narrow linear range and is easily saturated by moderate to high signal intensities. Although the film can be scanned and densitometry used to quantify signals relative to a loading control, this is generally not regarded as a quantitative measurement due to the limitations of film.

Although many laboratories have access to a communal developer and do not have to purchase their own, using film for Western blots is expensive. In addition to the costs of maintaining the dark room and purchasing chemicals, film can cost up to $2/sheet. Many times, multiple exposures (2-4) must be done to obtain an image in the linear range, increasing the cost of the experiment. Costs for hazardous waste disposal of developing chemicals also increases the cost of using film.

Charge-coupled device (CCD) cameras convert photons into digital signals using a light-sensitive silicon chip. High-performance CCD cameras are capably of matching the speed and sensitivity of x-ray film by cooling the silicon chip to sub-zero temperatures, which reduces background noise. In addition, detection sensitivity is increased by “binning” or combining the pixels. Binning raises the amount of light collected in the pixel area, which increases the size of each pixel.

For ECL detection, CCD cameras are coupled with digital imaging systems to capture, document and analyze Western blots. CCD cameras detect chemiluminescent signals over a much broader range than film. Typically, a digital imager can record from 4,096-65,536 levels of intensity (approximately 2-4 orders of magnitude greater than x-ray film). Therefore a signal that may be saturating when captured on x-ray film may still be in the linear dynamic range when using a digital imager.

The blot is placed in the digital imager unit and the signal is captured. Images can be manipulated immediately without waiting for a film to develop. Digital imagers also allow the convenience of digital records for storing and archiving experimental data.

Digital imagers can be used for fluorescent Westerns

In addition to documenting chemiluminescent Westerns, digital imagers also have the added capability of imaging fluorescent Western blots. Fluorescent Westerns are ideal for detecting more than one protein simultaneously (multiplexing). Loading and normalization controls can be detected on the same blot as the protein of interest. In addition, proteins of similar molecular weights can be detected concurrently providing enormous benefit when studying post-translational modifications such as phosphorylation.

Cost of using a digital imager

Digital imagers require an initial monetary input. Depending on the different technologies and options, imagers can cost between $13,000-$40,000 (even higher for imagers with fluorescence technology). The initial start-up cost can be recovered in as little as a year, though.

The advantages and disadvantages of x-ray film versus digital imaging are outlined in Table 1.

The choice of the appropriate technology for detecting and archiving Western blots will depend on the design of the experiment. If a yes/no answer is needed to determine if an abundant protein is being expressed, then film is more than adequate. However if proteins with varying expression levels are being detected or proteins need to be accurately quantified, than digital imaging is a better choice. 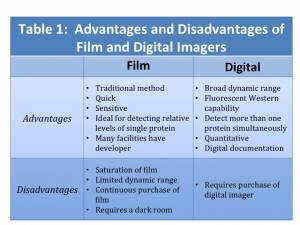