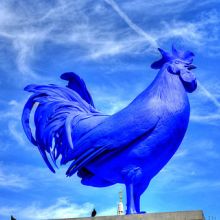 Western blot film – some is blue some is gray.  Some is even clear.  Then there are the boxes of pre-exposed film with black edges and corners that you only use when you have no other film left.

Does it make a difference which film you use for your experiment (other than the pre-exposed film, that is)?

A little bit of knowledge will help you decide.  Let’s look at the differences between film and the important things to consider when choosing film for your experiment:

How films are similar

Most x-ray film has 4 properties in common:

How films are different

Speed and resolution, and not color,  are actually the two most important criteria for choosing your film.  They are determined by the size of the silver halide crystals and the thickness of the emulsion.

If you are using low energy radioisotopes like 33P or 14C, then use high resolution film.  For chemiluminescence, use a high-performance film like LucentBlue.  Or, be on the safe side and buy an all-purpose film like Kodak BioMax, which has high sensitivity without compromising resolution.

As long as your film has the right resolution and sensitivity for your application, then color isn’t as important.  However, blue film is believed to reduce glare and eyestrain, which may help you out if you spend a lot of time looking for bands.  Some people also find that their bands appear to “stand out” better on a blue background versus gray.  Watch out though, blue film can be less sensitive and might not be the right choice for low abundance proteins.

And then there are clear films that turn completely transparent (except for your bands) when developed.  These might help you see very faint bands.

The price of Western blot film can vary greatly.  A sheet of film can cost anywhere from $0.50-$10! Film that is individually wrapped is more expensive, while blue film tends to cost less.

Which Western blot film is right for you?

Your boss will thank you.