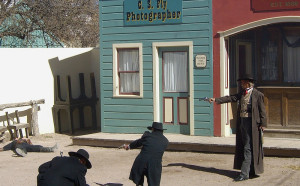 Who developed the western blot?

In 1975 Edwin Southern at University of Edinburgh developed the Southern blot, a method for transferring DNA to a membrane prior to hybridization with probes to detect specific DNA sequences. This was followed shortly by the development of a similar technique for transfer and detection of RNA sequences, by James Alwine, David Kemp and George Stark (Stanford University) in 1977. As a nod to Edwin Southern, they named the technique the northern blot. It was not long after these methods were developed that researchers sought to employ the same technique for detection of proteins.

The technique of western blotting was first published in 1979 by two groups: George Stark’s group (submitted in April, published in July) and Harry Towbin’s group in Basel, Switzerland (submitted in June, published in September). In addition, W. Neal Burnette in Robert Nowinski’s lab at the Fred Hutchinson Cancer Research Center submitted a paper in 1979 describing the technique; however the paper was rejected and not accepted for publication until 1981.

The Stark group published a technique for passively transferring proteins to a specialized membrane called, diazobenzyloxymethyl-paper. Proteins were detected by radio-labeled Protein A. Although they were the first to publish, the Stark technique did not become readily adopted by labs.

In contrast, the Towbin group published a technique that is very similar to the one used today. Their technique used electric current to transfer proteins to nitrocellulose membranes within the standard “immunoblotting sandwich.” Additionally, they used secondary antibodies to detect bound proteins.

Surprisingly however, it is Burnette who is often cited as the developer of the western blot – probably because he ingeniously named the technique Western Blotting in keeping with the compass theme for naming blotting methods, and because his lab was located on the West Coast. Incidentally, Burnette cites this naming of the technique as one of the reasons his paper was rejected (a reviewer said it was given a “flippant name”). Burnette’s method also electrophoretically transferred proteins to nitrocellulose, but like Startk’s group, used radio-labeled Protein A for detection.

Today we can thank these 3 labs for the technique we use today: Stark published first, Towbin gave us the current method, and Burnette used a good marketing technique by choosing a clever name.