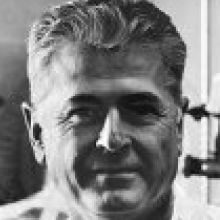 Oliver Lowry was a man who spent his life minimizing things.

After earning dual degrees at the University of Chicago in physiological chemistry and medicine, Lowry spent his career developing microanalytical quantitative methods.

Us protein people know him for his sensitive method for measuring the total amount of protein in a solution. As of 2010, his paper, “Protein Measurement with the Folin Phenol Reagent” (Lowry, OH Rosebrough, NJ Farr AL and Randall RJ. 1951. J. Biol. Chem. 193: 265-275), was still credited with being the most highly cited article.

Lowry based his assay on the “phenol reagent” developed by Otto Knut Olof Folin and Vintila Ciocalteu (now referred to as the Folin-Ciocalteu reagent). He determined that the reagent could bind to copper-treated proteins. The bound reagent would become reduced, resulting in a color change from yellow to blue. A spectrophotometer could then be used to measure the color change and quantify the amount of protein in the solution. The Lowry method for protein quantification was born.

The Lowry method allowed protein biochemists to easily and reliably determine protein concentrations with less bias from the amino acid composition of the protein (although the reaction is still partly dependent on polar amino acids). The method was immediately endorsed by Eric Sunderland and Arthur Kornberg, two prominent biochemists.

In addition to the Lowry method, Oliver Lowry also developed multiple sensitive microanalytical assays including those for:

He even invented a microbalance that could measure less than one-millionth of a gram! You know, because there weren’t any instruments sensitive enough for his needs.

Even though he focused on micro measurements, Oliver Lowry’s discoveries were macro.

For more information on Oliver Lowry, check out his autobiographical article, “How to succeed in research without being a genius” (Lowry, OH. 1990. Annu.Rev.Biochem.59:1-27).