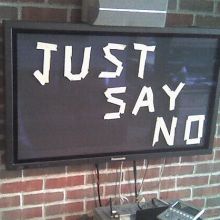 Stripping – the quick and dirty way to maximize the results from a single Western blot. It is tempting to use this technique to probe for an additional protein. But don’t be seduced by this seemingly innocuous step. While there may be a time when stripping is appropriate, more often than not, traditional stripping can lead you astray. It’s important to know the limitations and disadvantages of this technique.

Let me enlighten you to the dangers.

The basics of traditional stripping

Stripping a blot is a technique used to remove the primary and secondary antibodies from a Western blot membrane so that the membrane can be probed again with another set of antibodies. It can seduce you with promises of saving time, samples, and materials. Theoretically, instead of running multiple blots you could serially detect multiple proteins of interest or your protein of interest and a loading/normalization control.

The little problems with stripping

There are several inherent difficulties in stripping a blot.

It doesn’t really save time

You might think you save the time and effort of running a second gel, but stripping can take time too. Soaking, washing and reblocking the membrane can take an afternoon. Sometimes the treatment doesn’t work and has to be repeated.

The background is higher after stripping

Each time you strip and reprobe a blot, the overall background increases. This decreases your signal to noise ratio making it more difficult to detect your protein of interest.

It is not reproducible

Stripping is not a protocol that will work the same every time. You can not expect the same result from experiment to experiment.

The big problem with stripping – it is not quantitative

In addition to removing antibodies, stripping often removes some of the other proteins from the blot, even when milder conditions are used. The loss of protein is random and unpredictable. Due to this, you lose the ability to quantitate the relative amount of protein from the first detection to the second. Using a stripped membrane to detect a normalization/loading control is pointless.

All is not lost. There are other ways you can maximize the data you get from one blot.

If your proteins are sufficiently separated from one another during gel electrophoresis, then just cut your blot with scissors and use each respective piece to detect the appropriate protein. Just be sure you know where your proteins are and cut straight!

Fluorescent Westerns allow simultaneous detection of two or more proteins on the same blot, giving you all the benefits of stripping and reprobing a blot without the disadvantages of stripping.

If you really feel the need to strip, try a proprietary stripping solution such as Advansta’s Western Blot Strip-It buffer.  Composed of a mild buffer, it provides uniform stripping so you can obtain high-quality, qualitative data with multiple probes of the same blot.