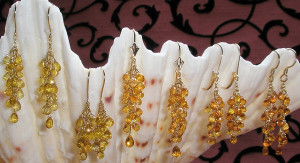 Did you know that your protein may get herself all dressed up before hopping into action? That as your protein traverses the ER, Golgi and cytoplasmic compartments she might pick up some baubles to drape around her amino acid backbone?

I’m here to tell you about some of the more common decorations your protein might use to decorate herself.

If any part of your protein spends time in the ER or Golgi, then she might choose to decorate herself with some glycans. Sugary glycans might be used to sweeten your protein up and are very common decorations. Your protein may choose between five different types of glycans. Often they are first acquired in the ER and made even fancier in the Golgi.

Your protein may choose to add or remove phosphate groups as she goes about her business in the cell. Proteins like to decorate serine, threonine and tyrosine residues with phosphate groups to change how they look and act.

If your protein decides to put on some acetyl groups, she might be ready to take on a new job. Acetylation and deacetylation of proteins turn on and off protein functions.

No, your protein is not about to turn into a wrestler if she adds some SUMO (small ubiquitin-like modifier) groups. The reversible addition of SUMO may cause her to change her location or allow her to interact with some new proteins.

Towards the end of her life, your protein may be attracted to ubiquitin. Proteins that choose to drape themselves in ubiquitin molecules are often (but not always) targeted to the proteasome for degradation.

Will you recognize your protein once she is done decorating herself? You might not – these modifiers can change her size and even prevent antibodies from binding. In a Western blot it can even lead to multiple bands being detected.

You didn’t know your protein could be so fancy, did you?