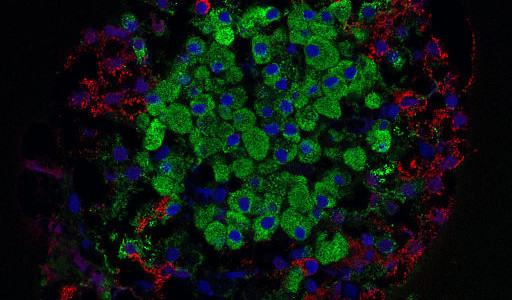 Wouldn’t it be great to retain all the benefits of fluorescence without the pitfalls? Directly  labeling your primary antibodies with fluorescent dyes can be a simple path to creating beautiful fluorescent blots.

In what techniques can I use directly labeled primary antibodies?

Any technique that involves a fluorescent antibody.  For example, flow cytometry, Western blotting, and immunofluorescence microscopy. You can use one antibody across multiple techniques, making the comparison easier. Using directly labeled primaries is extremely beneficial when multiplexing (using several antibodies in one experiment) with antibodies from the same species. This will  quench the headache of sourcing secondaries from exotic species.

Isn’t my signal going to be weaker since I am not amplifying with a secondary?

It may come as a surprise to you, but secondaries signal amplification is overrated. Because your primary doesn’t have an infinite affinity to the antigen, each time you wash your blot – and you wash a lot – you will remove some of your primaries. Using just primaries is usually enough for sufficient signal detection. As evidenced by those using peroxidase-anti-peroxidase antibodies (PAP) immune complexes, which don’t require secondaries.

It used to be, but not anymore. The labeling reaction used to require biochemical techniques such as size exclusion chromatography to remove a free dye, but in modern times labeling is straightforward and simple.

For example, our Spectradye Antibody Labeling Kits allow you to label your antibody in as little as 30 minutes. And this 30 minutes will save you hours and hours of dealing with secondaries.

Why use fluorescent dyes to label your antibodies?

A rule of thumb: if something is commercially available, it’s quick, easy and efficient relative to a home process. For example, modern cheap and cheerful DNA sequencing is possible because of kits containing fluorescently labeled dNTPs. Secondary antibodies with attached fluorescent dyes have a high signal-to-noise ratio increasing your sensitivity. They also have narrow emission spectra limiting signal overlap between the dyes.

Will SpectraDyes work with my current instrumentation?

We have 5 commonly used fluorescent dyes to choose from with emission range from 515 to 800 nanometers. But if you decide that you love your current dye too much to change, we also supply a kit without the dye so that you can use your own.